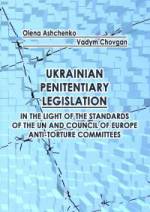 We offer for the Reader our Report on the results of analyzing of the Ukrainian penitentiary legislation, for its compliance with, firstly, the recommendations of the UN Committee against Torture and ill-treatment given to Ukraine by the results of consideration of the Third, Fourth and Fifth Periodic Reports of the Government (consideration took place in 1997, 2001 and 2007) on measures directed on implementation of the UN Convention against Torture, and secondly, the standards of the European Committee for the Prevention of Torture and ill-treatment and recommendations for the Government of Ukraine expressed on the results of periodic visits of the Committee to Ukraine in 1998, 1999, 2000, 2002, 2005, 2009, 2012 and 2013.

The report contains results of a study on the vulnerability of LGBT people while contacting law enforcement agencies.
Рекомендувати цей матеріал
X