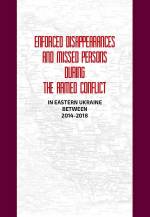 Pavlo Shvab, Yanina Smelyanska, Ihor Sosonskiy, Gennadiy Tokarev, Anastasia Yegorova, Yevgeniy Zakharov
Enforced Disappearances and Missed Persons During the Armed Conflict in Eastern Ukraine between 2014–2018 / compiler Ye. Zakharov; CO “Kharkiv Human Rights Protection Group”. — Kharkiv: LLB “Human Rights Publisher”, 2019. — 78 p.
ISBN 978-617-7391-59-2
For the reader’s attention, an analytical report is presented that shows the findings of the Kharkiv Human Rights Group’s study on missing and violent disappearances during the armed conflict in eastern Ukraine in 2014–2018. Researchers have collected data on more than 8400 disappearances, identified more than 1,600 who still was not found, classified the disappearance of the circumstances and the nature of the actions and identified more than 600 disappearances that fall within the definition of “enforced disappearance” in the international law. A submission to the International Criminal Court was prepared on the basis of the collected data.

Ukraine: working with the past for a peaceful future

The publication is devoted to the world experience of more than 50 truth commissions on different continents and the possibilities of using this experience for Ukraine.
Рекомендувати цей матеріал
X